THIBAUT is a company that was built on past family foundations and has continued to evolve in today’s modern machining industry.

1959: Mr Bernard Thibaut takes over the general mechanical activity adjoining the family garage. Keen for Mechanics, he develops his first machine for polishing slabs: the GB 10, first big success as more than 700 units have been sold. 1984: Thibaut launches the GB110 (multifunction manual machine). Over 800 of this machine have been sold today in 40 countries. 1990: Thibaut produces his first granite polishing line slabs which is at this time a revolution in terms of productions.

1992: Construction of a plant of 2000m² to rationalize the fabrication on one site.
The kitchen tops market becomes important for Thibaut and for this reason, develops his first multi-purpose machine specialized towards this market – the T50.

1996: Thibaut invests in a performing CAD system for the R&D department.

1998: The founders of Thibaut, Mr et Mrs Bernard Thibaut retired, after 40 years of investment in the Co. 4000 machines sold in the five continents and after having made a brand name recognised worldwide for his quality. 1999: Calas Production is created in Castres for the production of bridge saw. The TC08, the first bridge saw is launched. Since then more than 400 machines have been installed.

2002: Thibaut builds 865m² of new offices to answer the development of the demand. On this occasion, Thibaut reorganizes the offices in 3 mains department: Sales, Technique, Administration. 2004: Construction of a centre of 600 m².for trials to support our R&D and for training customers or employees. 2010: Installation of new global management software in order to improve our process.

Launching of the T558, 4 axis machine for the architectural precast concrete industry. 2014: Merging of THIBAUT and the historical business partner CALAS

2015: Launching of Octopod, the first smart hoseless and wireless pod in the world. 2017: Launching of the machining centre “T818 TOPS” with its 2 tables for pendular work. 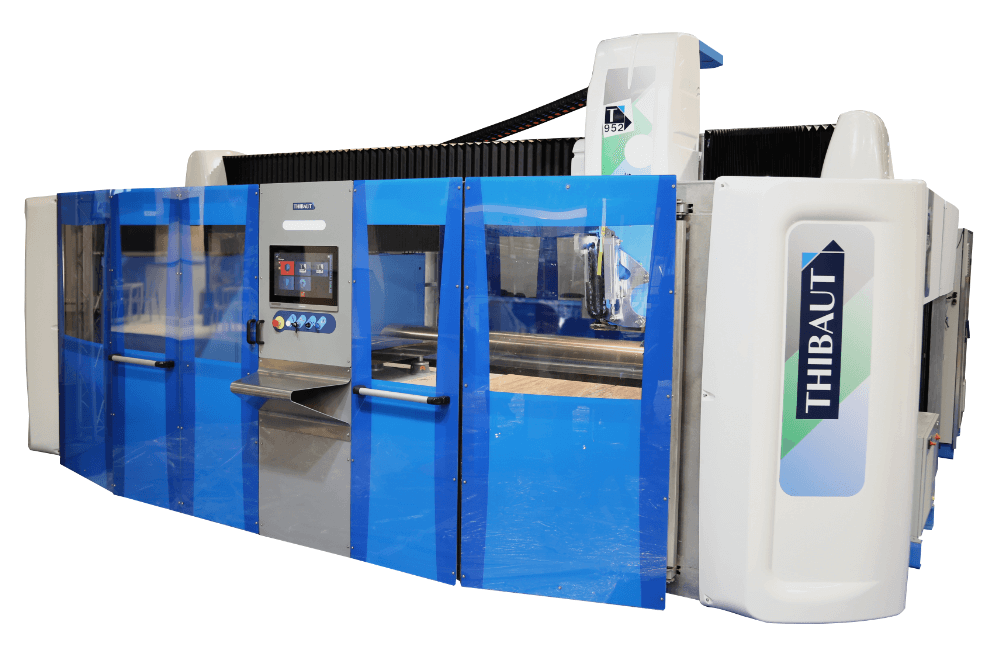 World Leaders In The Development Of Milling Technology

We are world leaders when it comes to a company that is capable of solving any machining requests that our customers may have. Due to our years of experience, we are experts in the milling industry. THIBAUT has an in-house Development Team that can offer your business state of the art design technology. As a result of which, we are able to offer solutions globally for all your milling requirements from artistic creations, buildings, funeral monuments, kerbstones and much more. From our manual machines to our state of the art computerized technology – such as our TOPS system – THIBAUT is perfectly placed to offer you the perfect solution for optimized production.

We are constantly evolving and looking at future innovations. In just 10 years, we were able to design and develop a FULL range of CNC sawing and machining centres. We work in collaboration with our customers and listen to their needs. It is for this reason, we are able to innovate according to the industry’s demands and are always working on exciting new development projects. After almost 60 years of manufacturing our very first machine, we have now sold over 7,000 machines worldwide. An impressive achievement and one in which we would like to thank our customers. Without you, we would not be where we are today.

Here at Thibaut, we launch no less than two to four new products every year.
We are able, therefore, to constantly remain innovative and be finely tuned to our customer’s needs
Our expertise is backed up with more than half a century’s worth of experience.
We have three departments dedicated to research and design technology and form the heart of product innovation.
We consistently invest in our Research And Development Department and is just one of the reasons why we are able to remain world leader’s in our industry.
We attentively listen to our customer’s objectives which enable us to respond and adapt quickly to their needs.

Multilingual Sales Department – At Your Service

With over 7,000 machines exported all over the world, THIBAUT is an industry leader when it comes to professionalism and quality which comes from years of experience.
Our strength, at THIBAUT, is our ability to offer our customer a wide range of 35 different machines. These include machining centres, multipurpose centres, sawing, milling, polishing, bush hammering, polishers and diamond wires to name but a few. These are all designed to shape all manner of materials.

Subscribe to the newsletter and stay up to date !